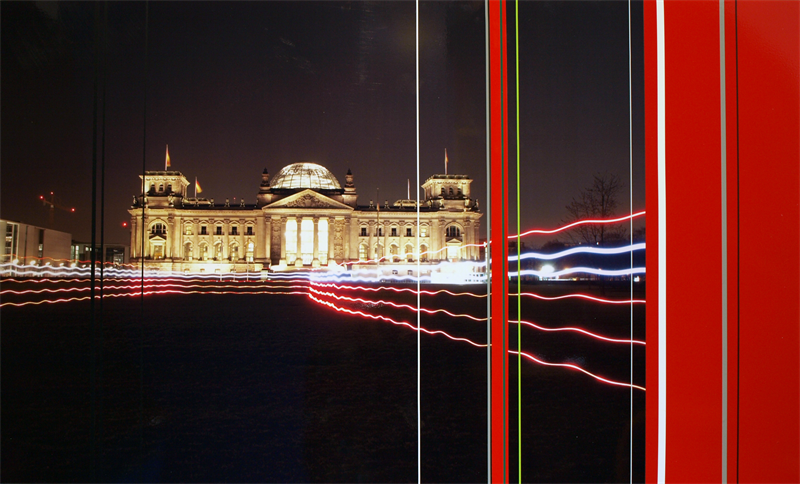 Fabian Freese is perhaps best known for his alluring and beautifully composed cityscapes. He utilises time exposed photography, capturing the stationary elements of a famous landmark site whilst blurring, or obscuring the moving elements. During the process of taking a long exposure shot Freese walks into the frame of the image and intervenes with a handheld LED light.  This process is called light painting and dates back to 1889.  Man Ray was the first well known art photographer engaging with this technique in his Space Writing series in 1935.

Freese applies a slow shutter speed where streets and buildings take on the characteristics of a painting. These depictions are as close as the artist has come to shooting dynamic and contemporary views of a particular city or building in a timeless dimension.  What is special about his scenes is the integration of vertical lines cut from foil and placed onto specific areas of the photograph.  On other occasions varnish and spray paint are used to create additional colour fields to imply an abstraction. In this body of work tradition and technology are fused in a new aesthetic.

Fabian Freese was born in 1982 in Wuppertal and lives in Germany. He graduated in 2011 at the Freie Akademie der Bildenden Künste in Essen, Germany. Since then he has exhibited widely in Europe, America and Asia.