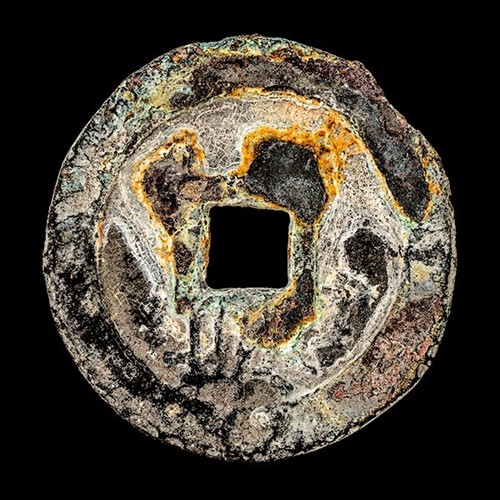 Since 1983 Stephen Sack has photographed ancient coins that have been buried and "transformed" through time. Corrosion acts as the alchemist, revealing an otherworldly meaning. The coins selected are not classified and often “worthless” to the collector. Sack insists that his work is not that of a curator who identifies and documents, nor are his artistic expressions about specific coinages. To him, these ancient metal discs are living organisms and pilgrims of time. He uncovers their innermost secrets and seeks to create stunning images, which originate from a spiritual place that occupies a part of our collective unconscious and imagination.

His recent series Embracing Emptiness: Photography and Alchemy of Ancient Chinese Coins, largely abstract, radiates a myriad of shades. Patina and decay form a mystical landscape almost extra-terrestrial in nature. The factual and intense colours in the photographs are exposed through the use of scientific lighting, like the different wave lengths of light deployed in astronomy to observe and snapshot the universe. Everything is alive, rock, stone and mineral, all belonging to the grand, infinite process and cycle that is life. The coins entombed into the earth, together in silence, have evolved into poetic dimensions and visions, where one can perhaps catch a glimpse of the divine of nature.

In China money is frequently associated with time-honoured beliefs, rituals and philosophy, they are a fundamental element of traditional customs and rites of passage of the most significant events: birth and death, love and marriage, the posterity of a large family. Coins become amulets and pendants to promote good health, luck and fortune, to ward off the evil spirits as well as to offer transit into the afterlife. The circle symbolises the heaven and the square the earth, where the void is the centre and the essential paradox. To embrace the emptiness is to find peace and harmony in this world.