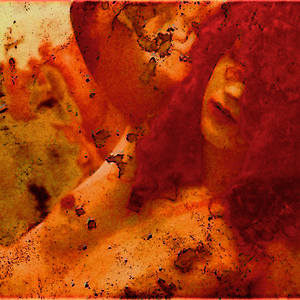 Flight of Fancy one of the images derived from Beat Kuert’s body of work Kan – Longing for Rain. These photographs along with his performance art were first shown in 2010 at InterGallery, Beijing, China, and refer to The Book of Changes, an ancient masterpiece of Chinese literature.

Kuert’s stunning representations engage with the dichotomies of existence.  A female body tinted in reddish hues appears tranquil and sound asleep - charged with innocence and beauty.  Upon reflection suspicion arises regardless of her visual force.  The question becomes evident, is there a dark side to her being?  Kuert deliberately challenges through contradiction causing uncertainty and bewilderment. His distinctive mastery inhabits a visionary world, a realm that captivates our mind and imagination.