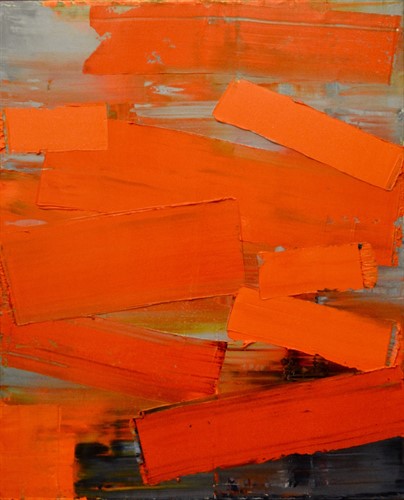 India,  a country with an extensive political and cultural history along with a pluralistic, multilingual and multi-ethnic society has inspired artists for millennia.  The region has always produced its own local artists who skilfully pursued an innovative approach in art making, presenting an aesthetic which has been globally admired.

Marcus Hodge a successful British painter well-known for his consummate portraiture and accomplished  equestrian canvases, travels frequently to the subcontinent.  In 2016,  he begun to artistically explore his lifelong fascination with the world’s largest democracy to develop a new painterly style. Moving forward meant that Hodge had to abandon the traditional methods of his craft. It took a great deal of courage, knowing that most collectors do not approve of artists who dramatically alter their work. Nevertheless, he recognised in order to convey his gathered impressions and insights in a distinct manner - a radical shift was required.

The Gateway and Tantric and series, where energetic strokes embrace densely worked hues, claiming presence and void, were first shown in November 2017 at Roundtree Tyron, London, achieving much public attention. Hodge’s latest exhibition Breaking the Cycle,  at Art Moorhouse, London, is an account of his most recent visit to the holy city of Varanasi. Delving into one of the country’s oldest ceremony  - the funeral procession – paying honour to the departed. Culturally, India’s society is far closer connected to death compared to communities in the western world, where demise is often taboo.  For Hodge and his paintings it represents a symbol of a new beginning - a blend of beauty, intellectual depth and spiritual meaning -.

Approaching the burning ghats of Varanasi through the narrow, winding streets leading to the edge of the Ganges, you press yourself into any small recess or doorway as yet another funeral party passes by. The deceased held high on their shoulders, wrapped in fine materials, accompanied by singing and prayers. Varanasi is one of seven holy cities in India and the oldest, continuously inhabited city in the world. Many head there to end their days in order to escape samsara, breaking the cycle of rebirth and achieving moksha or spiritual liberation. The title of the exhibition becomes a metaphor for the new beginnings we can all undertake.

On arrival the body will be dipped five times into the river, representing the five elements, then left on the steps while the water drains away. It is then placed on the pyre and lit from the embers of the eternal flame. This small fire has, reputedly, been kept burning by the descendants of the same family for many centuries. The journey is a cause for celebration as much as sorrow, the bodies slowly reduced to ash among the flames. Enormous stacks of timbers stretch along every street and alleyway and at the river’s edge piles of ash are consigned to the dark waters of the Ganges. Dogs and cattle pick their way along the bank as the next pyres are prepared and set alight. Colour abounds but always moderated by the greys and sooty blacks of the ash and scorched timbers.
This recent series of work was inspired by a trip to Varanasi and many previous to India. The structure of the timbers lent a strong abstract motif to many of the paintings. The thoughts and ideas based around samsara and moksha likewise gave shape to the composition and design, stained with the memories and experience of colour and place. The work continues to be less about finish as about process, one that may reveal something new and unexpected. Each picture finds itself in the mysterious and compelling process of being painted. The visual language is bold and simple, using various large tools with generous, direct application of paint. Texture, breaking and activating surface, a simpler arrangement and form of expression. A balance between action and stillness, light and dark, the seeking of infinite variety in repetition, through accident and chance. Intuitive, a felt response to these timeless ceremonies, a meditation on the universal human condition that perhaps binds us closer in this ever more fractured world.
For further information about Marcus Hodge's work and his exhibition 'Breaking the Cylce'  at Art Moorhouse contact  [email protected]
Until 21 January 2020
Art Moorhouse
120 London Wall,
London EC2Y 5ET

Video: Courtesy and ©Marcus Hodge, images and text), Elisa Martinelli (Art Moorhouse), Renée Pfister (foreword) and Joel Rundel (photography) with the assistance of Galina Matveeva, 2019. All rights reserved. The music has been licensed under under the terms of a free art licence.