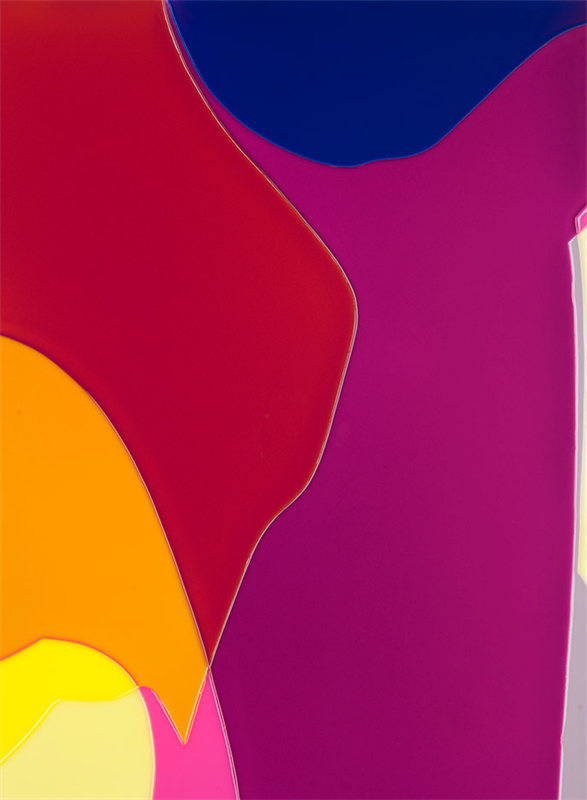 Flinging a pot of paint in the public’s face.

This was Ruskin’s view of J. M. Whistler’s paintings…what would he say about Peter Zimmermann's colourscapes?

Zimmermann’s work would probably not have appealed to Ruskin's conservative views. As a champion of Turner, Ruskin found Whistler’s work intolerable, particularly his depictions of Turner motifs, using similar effects to beautify the industrial scenery on the Thames. But from the “easel picture” to Clement Greenberg's pictorial "flatness", from the "allover" paint surface and "optical space" to Zimmermann’s “Technobilder", different painterly processes and materials are needed to drive painting in a new direction.

The image, the main force of Zimmermann’s artistic language, is continuously manipulated and transformed into chromatic two- and three-dimensional fabrications. Like a scientist in a laboratory, he discovers, analyses and reorders technical information, using the lens of the digital world, to reveal hidden matter.  On his creative journey, he focuses on communication and dissemination to reinterpret images and how these are perceived and processed by us.

His intense splashes of colour and drops are often unified but sometimes isolated and grouped on canvases in a variety of patterns, almost flowing with their own volition. Glossy surfaces reflect to viewers an altered perception of themselves and their immediate environment.  The act of playing with bright and dark hues, juxtaposed with each other, evokes paradoxical impressions of movement and tranquillity. Typically pigments are mixed with epoxy resin, providing Zimmermann with an amazing array of colours as well as a contemporary twist on the modern technique of pouring paint which recalls the drip paintings of Jackson Pollock and the stained canvases of Morris Louis. His pictorial language holds formidable accents that foster vitality and rhythm.

Artists have always embraced new methods and technologies to push the boundaries of art-making. Cai Guo-Qiang’s “Ignition Events” experiment with gunpowder on paper. More recently David Hockney has used the iPad instead of a traditional sketchbook, turning his index finger into a paintbrush, and Mark Flood pixelates and abstracts familiar corporate identities in his “Logo Paintings”.  Peter Zimmermann is part of this tradition of the artist adopting new technologies, his innovative approach exploring the algorithms of the digital world and artificial materials to create vibrant constructs.  Many artists have made significant contributions in fine art by researching and exploiting new possibilities. Traditional skills and materials can be improved, the latest equipment can be deployed, yet it is the artist’s curiosity that is decisive in working with advanced applications that stimulate our senses.

Peter Zimmermann was born in Freiburg, Germany, in 1956, and currently lives and works in Cologne.  From 1978 - 1983, he studied at the Kunstakademie Stuttgart, and taught as a Professor at the Academy of Media Arts Cologne from 2002 - 2007. His work has been exhibited at major international museums and galleries and is held in public and private collections worldwide.

The German Embassy announces with great pleasure Colourscapes, by Peter Zimmermann. The exhibition features a selection of abstractions, mainly from 2014 to the present day, as well as an earlier sculpture and a poster wall, offering guests and visitors an introduction to his artistic practice.