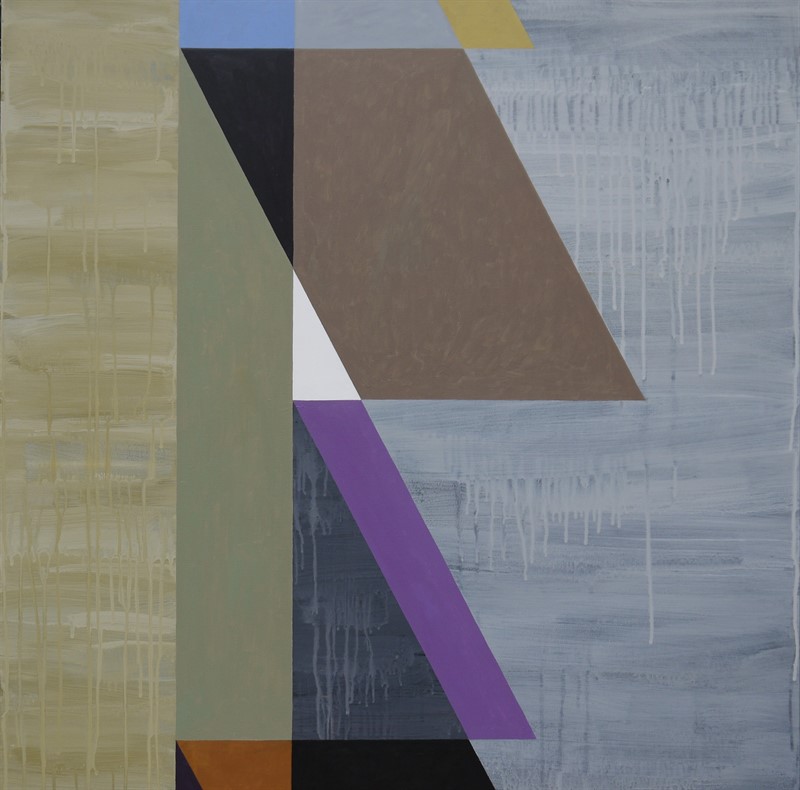 Jim Grundy's acrylic paintings are inspired by the relationship between colours and patterns found in the natural and built environment. During his travels he studies original designs of historical floors tiles and mosaics, textiles, architecture, and prehistoric pottery. Often, they are the starting point for his abstractions with squares, circles and triangles evolving into more complex elements on his canvases. Some patterns swivel like secret codes, as we can observe in Alignment No 1, whereas others move vertically, horizontally or diagonally in works such as Assembly No1 and Progression No 1.

Scholars of the 20th century defined geometry as the source of all beauty. The American architect and theorist Robert Buckminster Fuller emphasised ‘that geometry is the essence of everything that surrounds us’. Grundy’s compositions follow mathematical processes including symmetry, reflection and rotation, where the interaction between chance and control is a significant factor in developing each painting. Painterly planes become his visual playground, depicting clean-edged symmetrical colour fields meticulously rendered to reinforce the flatness of his paintings.

His pictorial representations can be referenced to the tradition of hard-edged geometric abstraction. There is a joyous correspondence between the fluid areas and the dense flat areas of paint, creating a shifting sense of foreground and background. The colour relationships are developed intuitively, responding to the environment. For instance, blues and greys can be viewed as representing the changing light of the sky and the colour of building materials such as brick, plaster and sand are used in response to the urban world that the artist lives in. Grundy’s method  results in a sophisticated meticulous paint and surface integrity.

In his recent Figure series, we encounter solid blocks of colour, defined through soft curvatures and textures.  Here Grundy has taken a different approach,  these formations are developed from historic costume patterns,  reducing the human figure to a series of measurements and cut out shapes.

Jim Grundy has exhibited in solo and group shows as well as open studio shows in London. Most recently he has shown a selection of works at Olympia Fine Art, Red Dot Miami and Art Palm Beach art fairs in a collaboration with Steidel Fine Art  and is represented by Renée Pfister Art & Gallery Consultancy, London. His paintings are held in private collections in the UK and abroad.