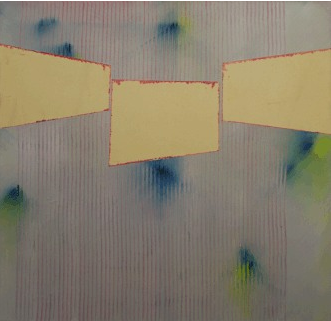 'Screen' originated as a solo exhibition of commissioned works by Rugby Art Gallery & Museum which included selected paintings from Dickens’ portfolio by the curator Jessica Litherland. The exhibition was supported by Arts Council England and was part of the Rugby Festival of Culture, and captures and re-presents qualities that are most commonly associated with that of celluloid film now considered to be a dwindling technology. Dicken’s commemorative body of work is exploring notions of what a screen is. She identifies specific qualities and has absorbed them into her painting practice. The result is a refreshed approach to what painting is and what it can be both in its broadest and most specific sense – of layering and masking, superimposition, of colour tints and tones, light emanation and the guillotine-like cut edges of film stock. Dickens represents these through the medium of oil paint. The stretcher becomes the screen - a window or ‘portal’ - and a final comparison is made that painting, like film, is all about illusion.