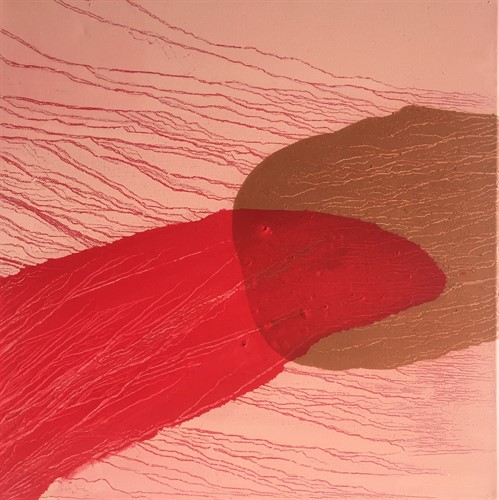 Patterns of growth and disintegration are the focus of Sam Hodge’s work with paint and print. Materials are constantly morphing, and new forms emerge from simple physical processes such as erosion, compression, fracture and flow – repeated and complex - but always different. Her depictions are like poems attempting to stir our imagination and emotions, reflecting on life's uncertainty and creating new meaning.  Hodge is interested in our response to the shifting and unstable nature of our material world, our attempts to understand, control, collect and endow matter with significance.

Finding archetypes in paint processes that echo those found in the natural world, Hodge interacts with the dynamic and generative properties of paint by allowing it to create ridges, rivulets and pools as it dries. She responds to these emerging reactions by attempting to control, collect or embellish. The paintings and monotypes that result, often call to mind biological images, reminding us that living things occur from similar material interactions. Hodge acknowledges and states: “Paintings are not static, passive objects, but continue to change slowly throughout their lifetimes”, something she has encouraged in more recent works by choosing pigment mixtures that will fade or change colour over time. Her processes also reflect on her scientific education and expertise. As a trained painting conservator, it is paramount to comprehend the behaviour of paint and pigments, which she translates and interprets in her two-dimensional works.

Besides, Hodge is drawn to human-made objects that have been transformed by methods of accident and weathering. She collects specimens of this (un)natural history from the coastal strand-line, city roads, jacket pockets or the studio floor. Things eroded, smashed or squashed flat, which she then converts into prints. These etched and pressed traces become ambiguous metaphors, resembling organic and geological shapes, reminding us of our material connections, entanglements and the transient nature of life.

In her new series of polymer prints Hodge is expressing her concerns about the destruction of our natural habitats. She utilises plastic scraps which were washed-up on the beach, altered by wave action and fragmentation to resemble and replace the sea creatures from the deep. By contemplating the precarious aspects of our fragile existence, Sam Hodge's work also corresponds to the theme of 58th edition of the Venice Biennale 'May You Live In Interesting times'.

After graduating in Natural Sciences, Cambridge University, Sam Hodge went on to study painting conservation at the Courtauld Institute. While working as a painting conservator for various private and public collections including Tate, she also studied printmaking at Morley College, The Royal Drawing School and Fine Art at The City Lit.

In 2008, she moved into her first studio and began to make and exhibit her own artwork.  Since then she has been selected for several opens and prize shortlists. In 2018, Wells Art Contemporary, Somerset; The Neo Print Prize, Bolton, 2017 and in 2016, The International Print Biennale, Newcastle. Hodge also participated in 2015 at The Royal Academy Summer Show; The Creekside Biennial, The Griffin Open, London and Pushing Print, Margate in 2013.

Recent exhibitions include in 2019: Vital Matter, Muse Gallery; As the Crow Flies,  Bo.lee Gallery;  By the Way,  Lewisham Arthouse, London.  In 2018, Surface Tension, The Stone Space, Leytonstone; Between the Lines, Gerald Moore Gallery, Eltham and in 2017, In Residence, Griffin Gallery, London. In 2016, the Malaspina Gallery, Vancouver,  Lot of Things Have Happened, group show, curated by Denise Hawrysio and in 2015, Roz Barr Architects Gallery,  A Catalogue of Misfortune, solo exhibition and book launch.

Her work is held in numerous private collections in the UK and abroad. A Catalogue of Misfortune, her first publication has been acquired by several public collections including The Museum of Modern Art and The Metropolitan Museum, New York, USA.